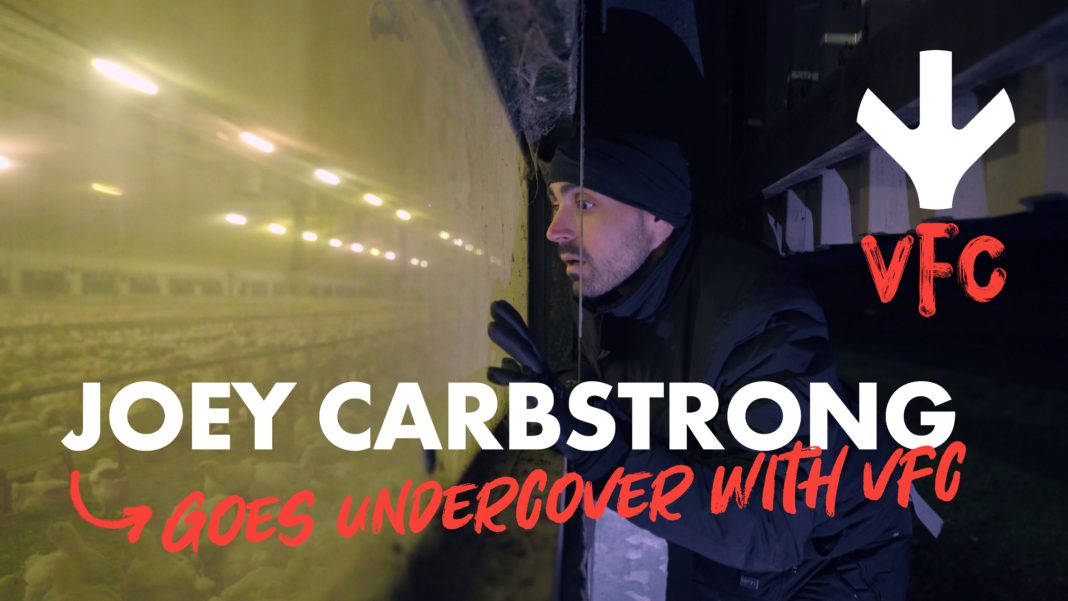 VFC reveals how it managed to carry out its chicken farm investigation with Joey Carbstrong, and what it hopes to achieve from it.

“If that’s not one of the biggest injustices on Earth right now, I don’t know what is.”

Carbstrong was speaking to Glover about how chickens “display amazing traits of intelligence at such a young age” and are “emotional beings”, but how, in the barn, those 30,000 birds couldn’t display their natural behaviours.

“All they know is suffering and misery. There’s faeces everywhere, ammonia in the air, machines pumping. They don’t experience happiness,” you hear him say. “And all of this just so someone can have a five-minute meal.”

It’s a harrowing point, made in a harrowing video. The six-minute film was shot by Christopher Shoebridge, an ethical filmmaker and photographer. Sharing the post on LinkedIn, Glover states that over 95% of chickens in the UK are farmed this way: “We think it’s wrong and that’s why we started VFC.”

While VFC couldn’t share details of the investigation, keeping in mind the safety of the investigators and future undercover operations, the brand’s media officer Kate Fowler told The Vegan Review that these films are made without asking permission from the farms.

“If we did — and were granted permission, which is unlikely — we would not see typical conditions,” she said. “If they knew we were coming, they would at the very least have killed all the ailing birds and hidden the bins full of victims. So, to reveal the everyday reality of life on a typical farm, we always go unannounced.”

Fowler calls the issue systemic, noting that the farm was no better or worse than others. She highlighted the problems of enforcing an industry-wide change, starting with the government. “Of course this won’t happen, not least because it would disadvantage British farmers over those in other countries.”

Retailers are also in competition with each other, with little incentive to improve conditions and increase the cost of the final product. “And in any case,” she added, “any welfare improvements accepted by the powerful farming lobby would be so inconsequential that the moment they were agreed, we’d be campaigning to overhaul them again.”

So what’s the solution? “Stop buying and consuming chicken meat,” said Fowler, extending that rhetoric for ducks and turkeys, who suffer similarly. She also believes plant-based businesses such as VFC play an important role, as it’s consumers, not governments or retailers, who will be able to end factory farming.

And for its part, VFC measures its success differently than other alt-meat brands. “We won’t win the argument with bad food — even if the future of the world literally depends on it,” she said. “Where most plant-based businesses focus their marketing on taste, with perhaps a mention of health and/or environment, we’re a little different. We measure our success only in the number of chickens’ lives spared.” (At the moment, the brand’s website states it’s saving 533 chickens’ lives every week.)

Fowler noted that there are two things required: “We need to show people just how bad factory farms are, and we need to provide them with the solution.” The film with Carbstrong does the former, while the brand’s product offers the latter.

Anay Mridul
Anay is journalism graduate from City, University of London, he was a barista for three years, and never shuts up about coffee. He's passionate about coffee, plant-based milk, cooking, eating, veganism, writing about all that, profiling people, and the Oxford Comma. Originally from India, he went vegan in 2020, after attempting (and failing) Veganuary. He believes being environmentally conscious is a basic responsibility, and veganism is the best thing you can do to battle climate change. He gets lost at Whole Foods sometimes.
Previous articleLockdown diaries: Brits on how the pandemic introduced them to veganism
Next articleHow vegan were our prehistoric ancestors?