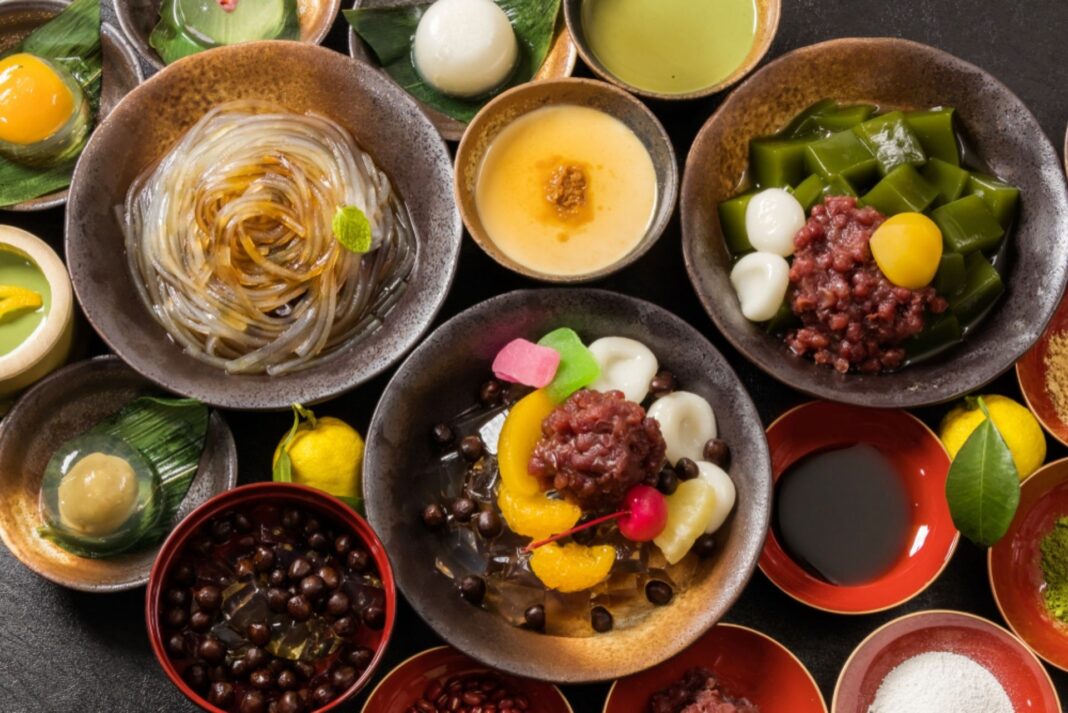 Wagashi are traditional Japanese confections that happen to be vegan, generally using agar-agar. Now, it’s making its way onto the global culinary scene.

Wagashi (和菓子) is the general term for traditional Japanese confections, which are often served at tea ceremonies, given as gifts, or consumed as afternoon snacks. To call them sweets is somewhat misleading, for they are certainly more than just candies. Wagashi are tagged as ‘the next big culinary trend’ coming from Japan, and they happen to be vegan.

Designed to accompany and complement the naturally poignant taste of green tea, wagashi are often elegant and intricate in their composition and design, as befits the aesthetic of the tea ceremony for which they were created. Serving quality wagashi is perceived as a sign of intelligence and good taste. When done well, it is craft at its highest level.

Chinese culinary has had a significant influence on Japanese cuisine. It began during the Nara Period (710–794), when tea, sugar, and the dim sum steaming technique were introduced.

Sugar was initially used as medicine and became an ingredient used for confectionary during the Muromachi Period (1336–1573). Despite being rare at the time, sugar became a fixed commodity in the life of the Japanese upper class. The arrival of sugar in Japan changed wagashi in every respect. People began experimenting with mixing sugar with different raw materials, and a burst of styles and aesthetics came about. Up until today, wagashi falls somewhere between food and art.

The preexisting Japanese vegetarian cuisine (which made extensive use of different kinds of beans) combined with traditional Chinese confections led to the unique wagashi known today. They come in a vast range of sizes and shapes; some are seasonal, some available year-round. Certain kinds are identified with a particular region of Japan, while some are eaten and produced nationwide.

Kyoto, the former imperial capital, is wagashi central, but wherever there is tea — and in Japan, that is everywhere — you will find these sweet delicacies. Wagashi are usually classified into three main categories: namagashi (fresh confectionery), han namagashi (half-dry confectionery) and higashi (dry confectionery). The simplest way of talking about wagashi is distinguishing them according to strength, softness, and viscosity. One of the most popular ones is jelly. 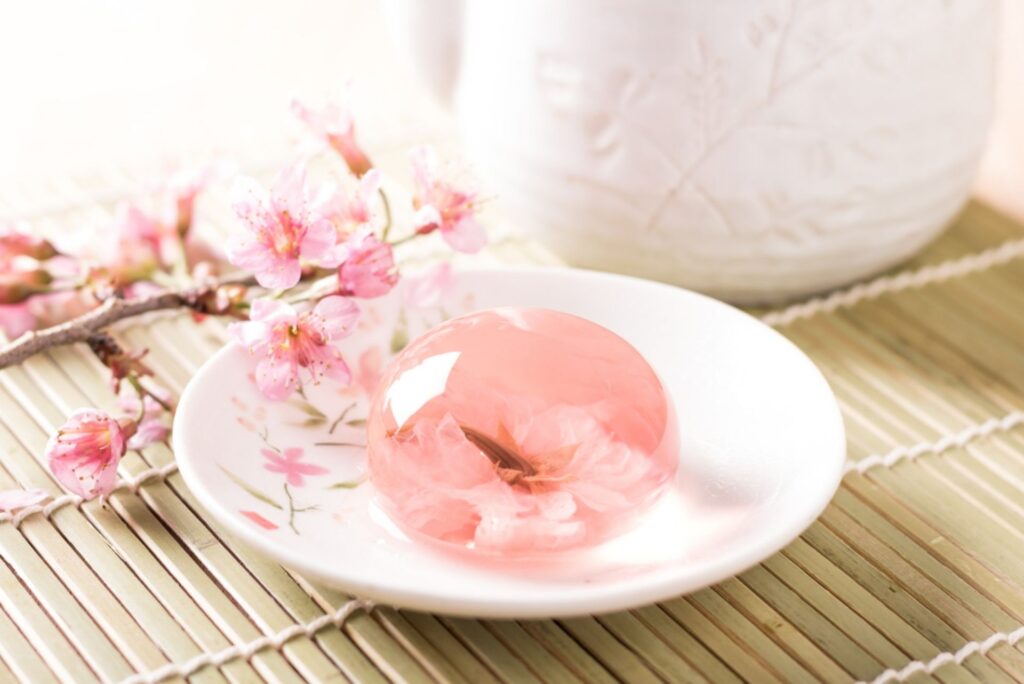 Experimenting with all kinds of thickness and textures, the Japanese have taken jelly to a whole other level.

The coagulants used by the Japanese are not animal-derived gelatine. For hundreds of years now, the Japanese were able to produce ‘gelatine’ from algae, or to be precise, from algae that contain a large amount of agar-agar (a jelly-like substance) and other chains of sugar molecules. This vegan gelatine became the foundation of an entire family of wagashi.

What’s the difference between agar-agar and gelatine? Agar-agar is more potent, flavour-neutral, and has no aftertaste. Due to its coagulant potency, you only need a mere amount to achieve solidification. Therefore, it is cost-effective and allows playing around with the dosage to reach the desired result.

Many restaurants today use agar-agar for molecular cuisine to stabilise dishes. Using agar-agar enables the creation of unique textures and shortens processing in the vegan kitchen. Agar is cruelty-free, Kosher and Halal. Its advantage is that it melts at boiling temperature, and firms at room temperature, unlike gelatine, which melts at 37°C and requires refrigeration to firm-up.

But agar-agar solidifies quickly and therefore requires you to work fast or use a blender to prevent lumps from forming.

Here are some examples of traditional vegan wagashi. 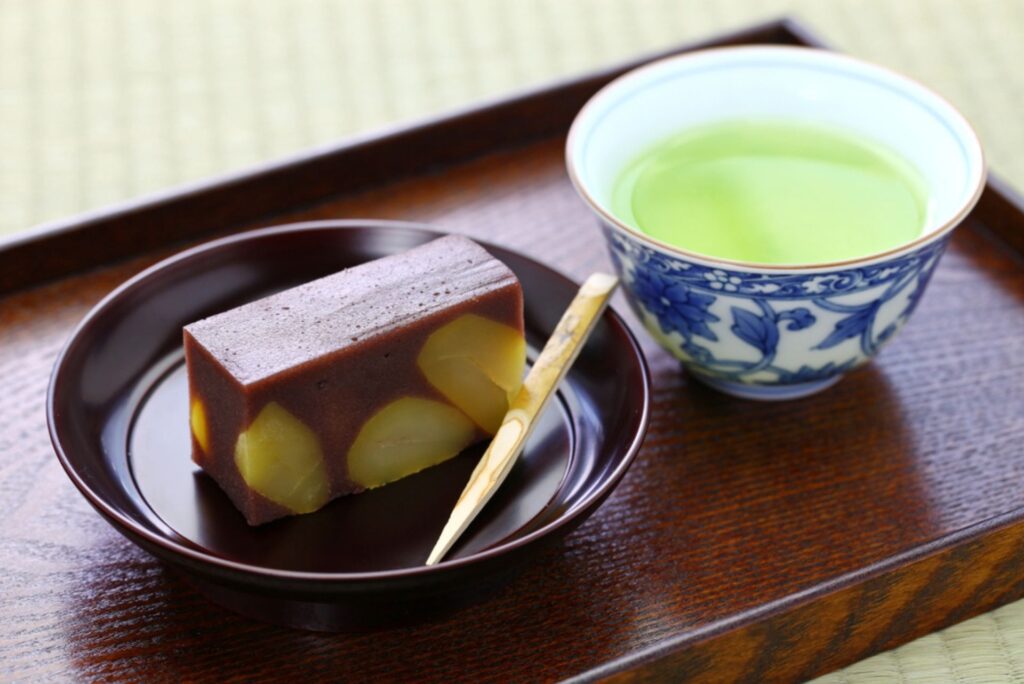 One kind of traditional Japanese dessert that dates back thousands of years is yōkan. It is made of azuki (red mung) beans, agar and sugar, and is a smoothened jellied sweet that has either chunks of bean paste in it, or a combination of agar-agar jelly mash with bean paste. 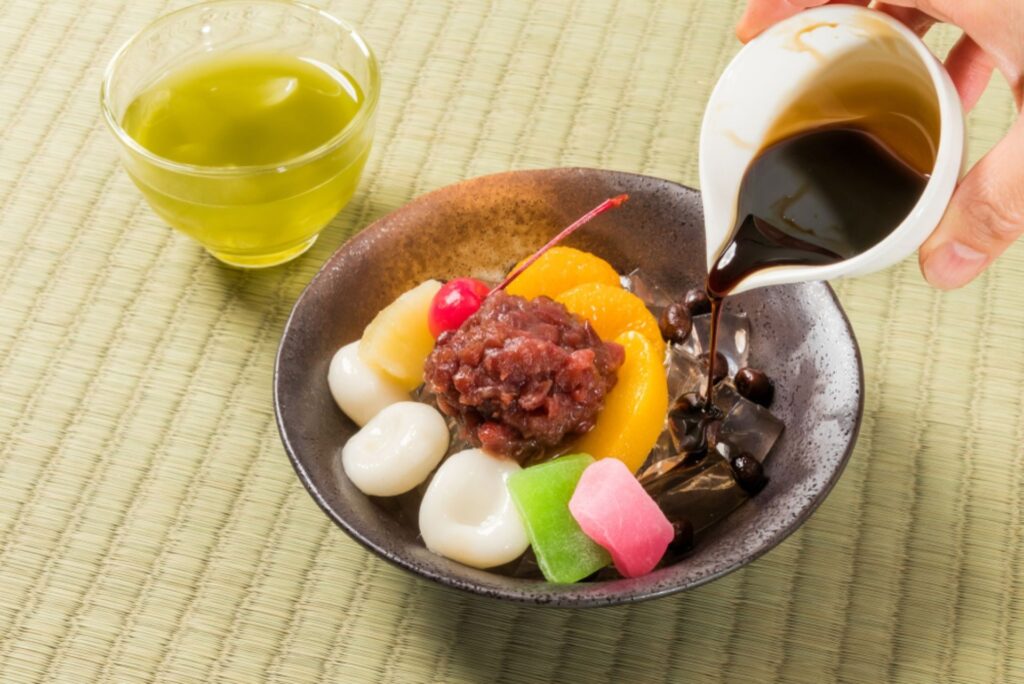 Another traditional wagashi is called anmitsu. It is made from agar-agar, sugar syrup, fruits and red bean paste, and is served in restaurants all across Japan. A little agar-agar is added to the cooked fruit to help it stabilise, but the taste is similar to the original fruit.

Hakuto jelly (白桃ゼリー), for example, is based on peaches that grow in the summer in the area of Okayama. A slightly different take on this dessert is coffee jelly (コーヒーゼリー), which was first introduced in Japan at the end of the ’60s and became a highly popular wagashi. 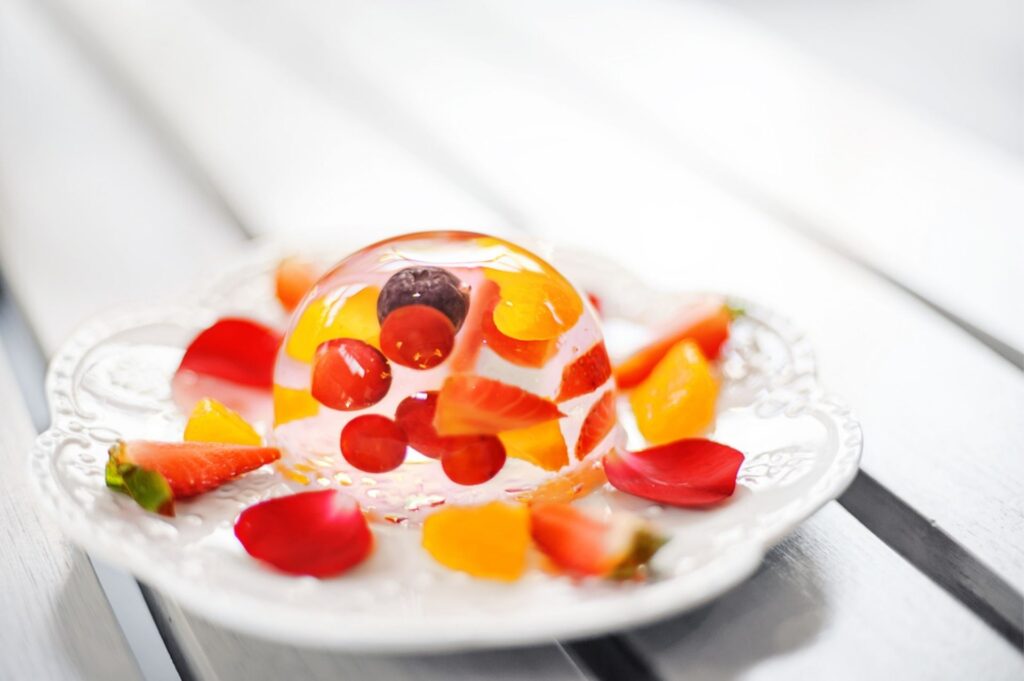 The raindrop cake (水信玄餅) is a famous agar-agar based wagashi. It’s a transparent cake made from water and agar-agar. It got its name because it resembles a large, translucid waterdrop. The raindrop cake is delicate, graceful jelly that melts while eating, and gives a magical feeling of what it is like to be eating water.

This wagashi perhaps looks like water but is calories-rich since it is served along with sugar syrup and kinako (黄粉 or きなこ), a roasted soybean flour that makes up a sweet powder. This cake will melt within 30 minutes of being served, making it the Cinderella of desserts. 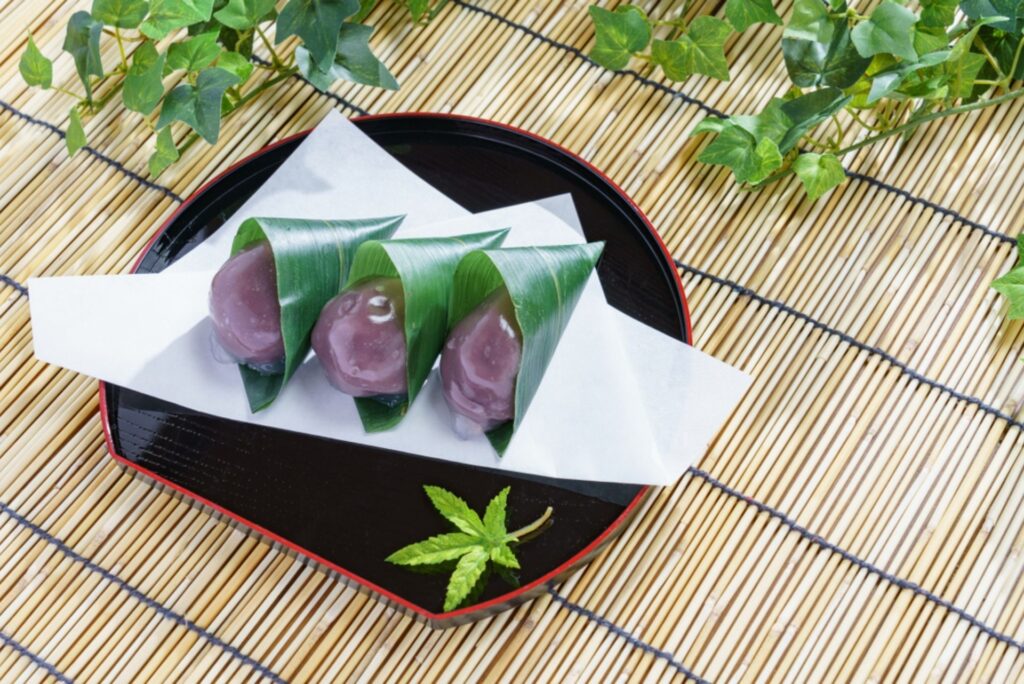 Another interesting coagulant used in Japanese wagashi is kuzu (or kudzu), a traditional starch extraction from the roots of the kuzu plant. The kuzu plant (Pueraria lobata) belongs to the pea family and is native to both Japan and China.

It’s used to make a starchy jelly confection and for thickening soups and sauces. The plant is attributed with nutritional and medicinal properties, and is flavour-neutral.

Wagashi may soon be incorporated into the global culinary scene the same way that sushi and matcha have. In nowadays Japan, wagashi manufacturers, known as wagashiya, are now suggesting new ways to enjoy the ancient delicacies. For example, Mannendo, one of Tokyo’s most exquisite traditional Japanese wagashi shops, currently recommends trying the signature Edo-period wagashi omedetou (おめでと) with a good cup of coffee.

Aviv Nesher
Aviv Nesher is a current Schwartzman scholar studying her master’s in management science in global affairs at Tsinghua University in Beijing. She works at the intersections of environmental action, trend analysis, and sustainable fashion. Her writing revolves around integrating sustainable practices within different industries and markets, and policy development that generates sustainable impact. Aviv has been vegan for five years and raw vegan for one year. She believes that transitioning into a plant-based diet is one of the most significant steps individuals can take to tackle the eco-climate crisis. Aviv is a graduate of the Hebrew University of Jerusalem, a United World College alumna, and a Huayu Scholarship recipient.
Previous articleThe Ultimate Guide to vegan food in Seoul
Next articleChinese fast-food chain to roll out vegan OmniPork wontons nationwide after successful launch