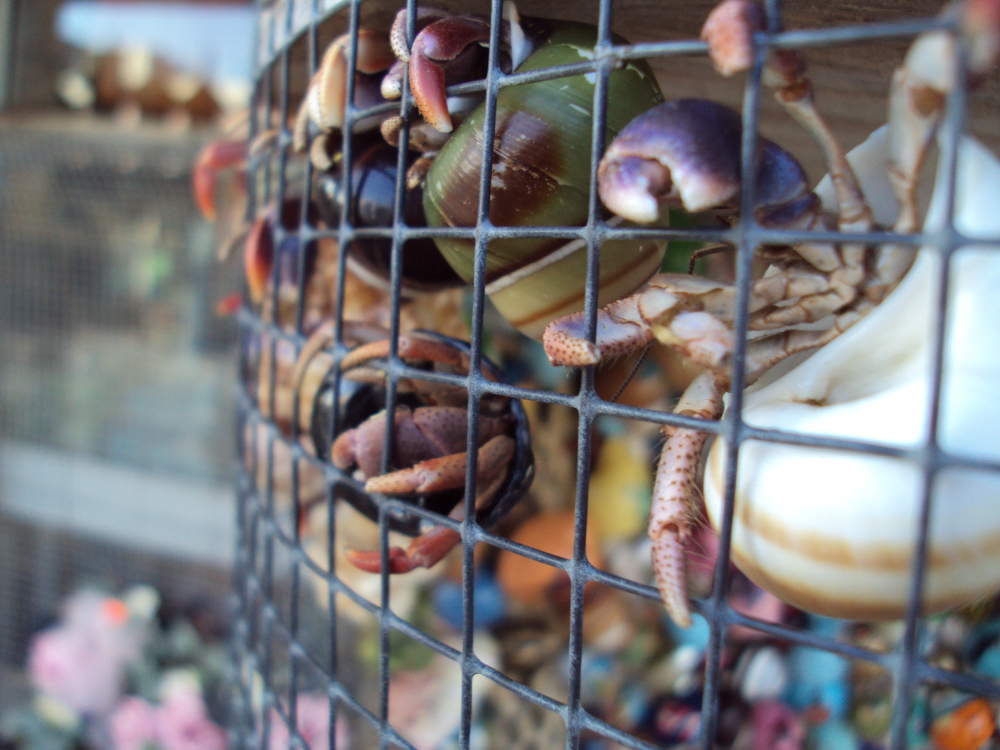 We buy them as pets for children after spotting them on the boardwalk, picking favourites through the painted shells, but where do hermit crabs from?

Tree crabs, as they are often called, come from tropical climates. They are picked off the trees, collected in burlap sacks among thousands of others, and cracked out of their shells allegedly using inhumane methods to then be forced into one of the painted ones they are supplied with. Survivors are then left without proper care, which results in cannibalism because of the lack of water and food.

Hermit crab expert and activist Kai Holloway went viral on TikTok by shedding light with video content on the abuse. The videos caught the attention of millions of viewers after exposing the hermit crab industry and the horrors that currently take place behind the scenes.

Holloway explains: “In places where the common purple pinchers (Coenobita clypeatus) live, they are often called ‘tree crabs’, meaning they do a lot of climbing about. This makes them easy to spot and gather, which they do by the thousands in burlap sacks or other bags.” 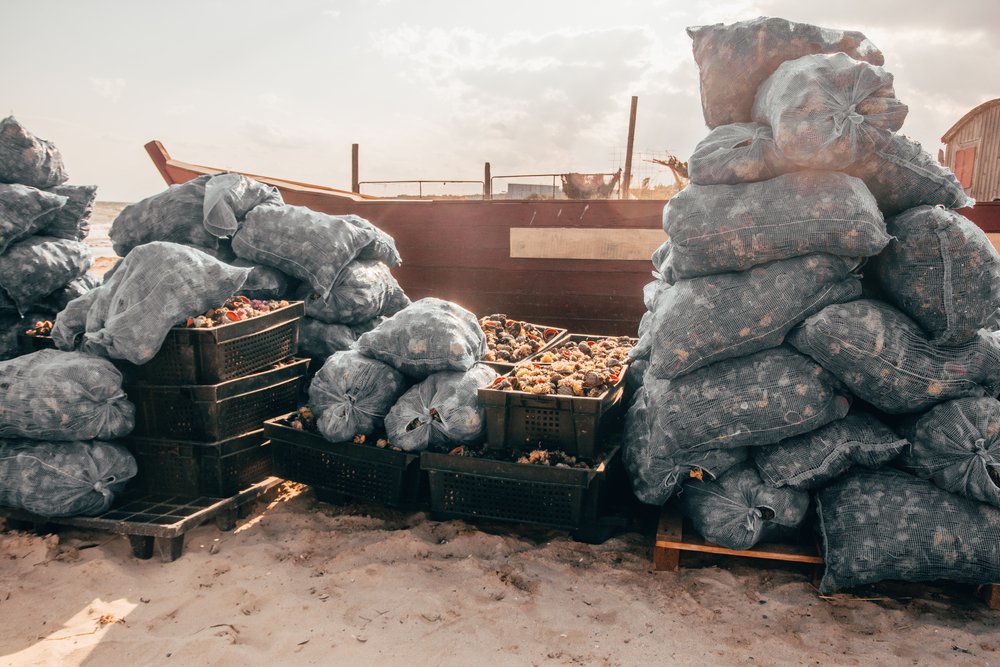 Hermit crabs, who belong to the superfamily Paguroidea, reside in tropical places in the Caribbean such as Vanuatu. “They can live for upwards of 40 years in the wild. Most die within the first month of captivity due to the trauma and stress endured through being caught and sold,” says Holloway.

Read our story about the illegal parrot trade.

A very common practice for hermit crabs after they are captured is to be put in stressful and life-threatening conditions to decorate their shells in an effort to add more to human appeal. These crustaceans use their shell to protect their soft abdomen from sharp objects and the sunlight. Often, these shells aren’t very pretty to consumer’s eyes.

“To get them into a more desirable shell, there are a few methods used,” says Holloway. “Cracking the shell off of the crab is one way. Other methods include drilling a hole in the shell and using a wire to ‘poke’ the crab out, or heating the bottom of the shell to distress the crab enough to leave its shell. They cannot be pulled out; they will let themselves be ripped in half. I think the painted shells are mostly just to get the attention of small kids, whom they are often sold to.” 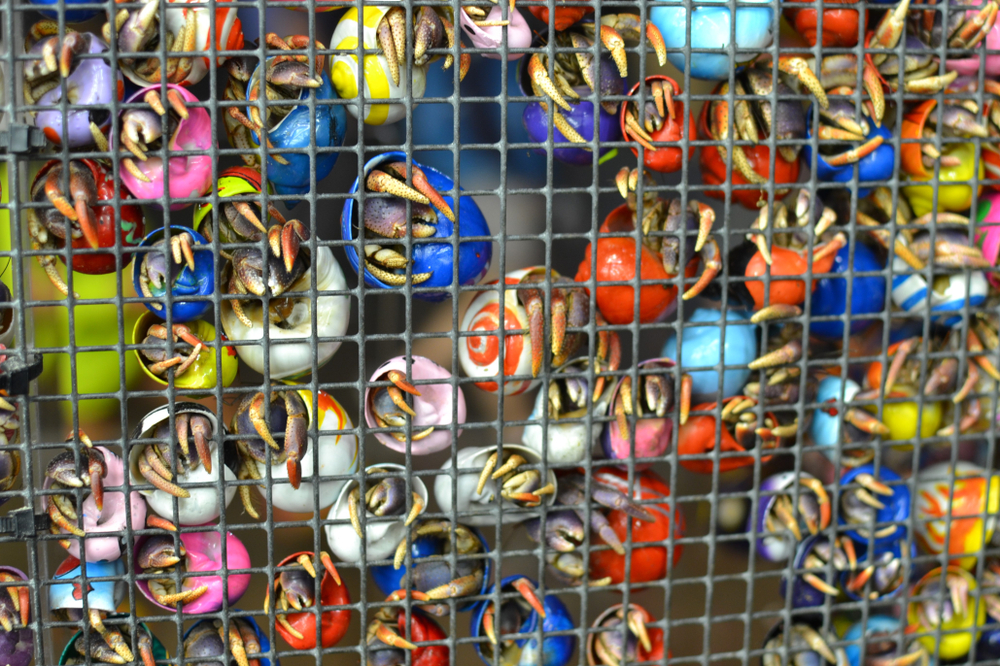 What’s the best way of taking care of hermit crabs if you do own one as a pet? Holloway suggests replicating the world from where they came as closely as possible. Providing them with a deep sandy substrate, damp enough to dig tunnels, is very important to their moult cycle. Salt and fresh water should also be provided. The salt assists with moulting as they store it in their shells.

When we purchase hermit crabs from the boardwalk, they often come in a small plastic container with water sponges. Holloway advises against the water sponges: “They get mouldy and gross, and the crabs can’t really drink from them anyway.” She also suggests that a closed lid, as opposed to a mesh lid, will help maintain high humidity, which hermit crabs need in order to breathe.

You can make a difference too. Avoid purchasing exotic pets as beach souvenirs, as they are better off in the wild than in captivity.

If you do own one, provide a home similar to their natural habitats, where their life span is 40 years. Avoid improper care by feeding them a diet that consists of vegetables, collard greens, fruits, and protein from nuts and fish.

Currently, the Land Hermit Crab Association is the most prominent activist group advocating for hermit crabs. Speak up when you see improper enclosure at pet stores and if you wish to, join such activist groups to raise your voice.

Tijen Najarian
Tijen holds a certification in Vegan Nutrition, and Chinese Medicine from the University of Hong Kong. When Tijen was diagnosed with Crohn’s Disease at age 23, she set out on a path that would dramatically change the course of her life. After years of pain, struggles with the effects of medication, and countless differing opinions from Western doctors, Tijen put her trust in a holistic practitioner and began educating herself on natural medicine and healing remedies. Upon learning that certain foods are inflammatory to the gut microbiome, she chose to cut all animal-based foods from her diet. Based in New York City, she has been in remission for five years and has been blogging her health journey and struggles inspiring many to go vegan themselves, a decision that would ultimately lead to her brand Tijen the Vegan.
Previous articleHow to transition to a plant-based diet in one weekend
Next articleThe issues holding veganism back from going fully mainstream