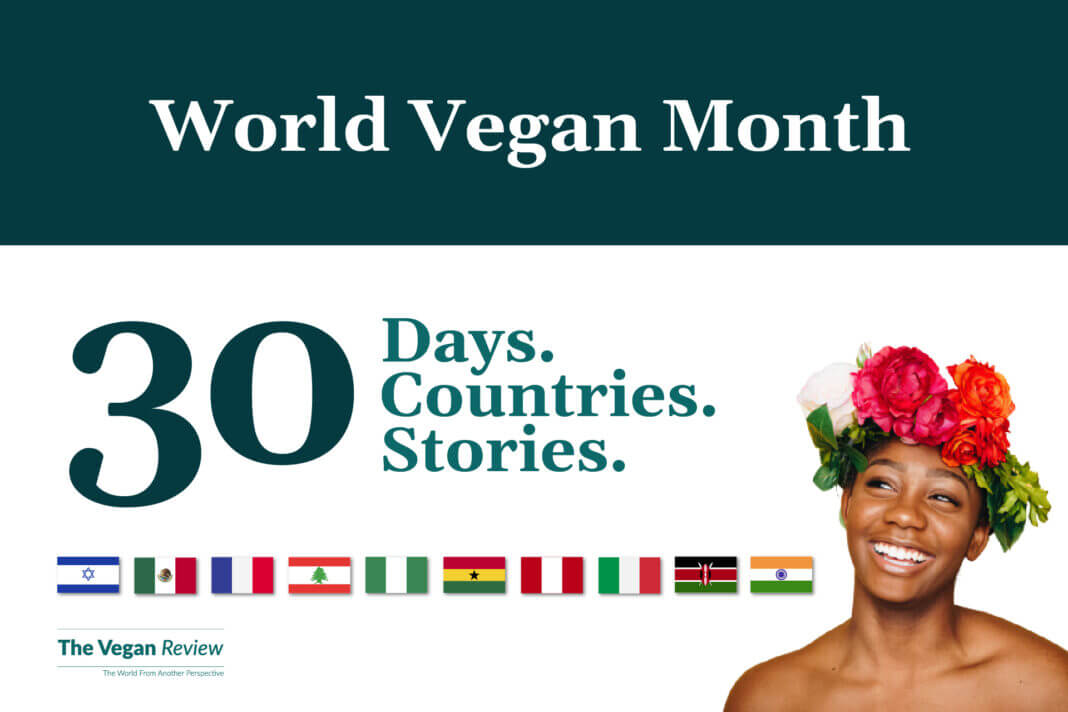 This November is the 26th World Vegan Month. Vegans from 30 countries tell their stories to The Vegan Review about what it’s like being plant-based around the world.

The year was 1994. Louise Wallis, chair of The Vegan Society, was looking for a way to commemorate the 50th anniversary of the world’s foremost society dedicated to a vegan lifestyle.

And that’s how World Vegan Day was created. Speaking to Animal Rights Zone in 2011, Wallis explained it was easy. She knew the society was founded sometime in November 1944, but not the exact date. So she decided on November 1, “partly because I liked the idea of this date coinciding with Samhain/Halloween and the Day of the Dead — traditional times for feasting and celebration. Both apt and auspicious. And it’s thrilling for me now to see how the event has taken off worldwide.”

And take off it did. Since then, World Vegan Day (or International Vegan Day) commences a month celebrating plant-based diets and the vegan movement across the globe. World Vegan Month was initiated to spread The Vegan Society’s message of shunning all animal products and living a cruelty-free lifestyle.

World Vegan Month follows October’s Vegetarian Awareness Month, and both movements share some similar messages. Every year, there are numerous events the world over, promoting plant-based diets and vegan fashion. This year, of course, isn’t the same.

We’re all at home, and the best we can do is commemorate it virtually. To that end, The Vegan Review is speaking to vegans from 30 countries — one for each day of November — across the globe. They’re all answering the same set of questions, describing what it’s like to be on vegan in their country.

Iraq, Ghana, Mexico, Italy and Sri Lanka are just five of those 30 nations. Veganism is different around the world, with multiple levels of accessibility, affordability, and education. But everywhere, people are united with the same motivations: climate change, factory farming and cruelty to animals, health, and food security. Our campaign hopes to bring those stories to light.

Did you know that the Hebrew word for vegan is ‘tiv’oni’? Or that a large number of traditional Nigerian dishes are vegan-friendly? Or that vegan cheese costs the equivalent of $20 in Baghdad?

There’s a lot more where that came from. Tell us your stories of veganism in your country on social media with the hashtag #WorldVeganMonth. Happy World Vegan Month!

Anay Mridul
Anay is the managing editor of The Vegan Review. A journalism graduate from City, University of London, he was a barista for three years, and never shuts up about coffee. He's passionate about coffee, plant-based milk, cooking, eating, veganism, writing about all that, profiling people, and the Oxford Comma. Originally from India, he went vegan in 2020, after attempting (and failing) Veganuary. He believes being environmentally conscious is a basic responsibility, and veganism is the best thing you can do to battle climate change. He gets lost at Whole Foods sometimes.
Previous articleMy experiences facing the extremes of vegan activism
Next articleVeducation Consultation: One woman’s mission to get veganism on the school curriculum