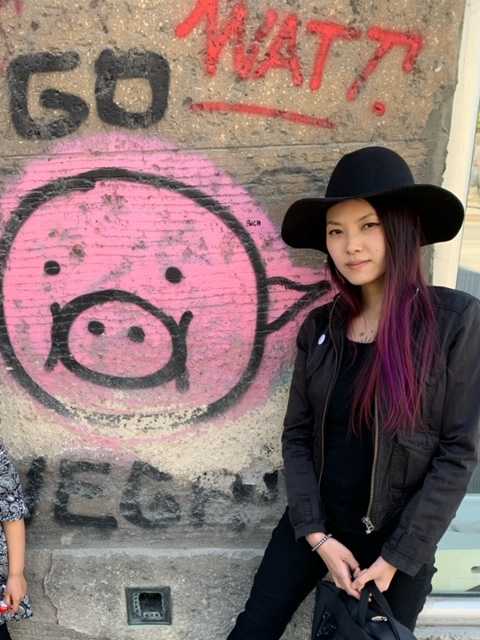 For World Vegan Month, The Vegan Review is sharing the stories of vegans from 30 countries around the world. Here’s one from Japan.

Yuu Ilic, 36, is a full-time mother from Japan

When I was younger, I really enjoyed going to the zoo and the aquarium, but I felt sorry for the animals, so I felt conflicted.

When I was 23, due to worries at home and at work, I became depressed. When I was struggling with insomnia, my friend at the time took me to a plant-based restaurant, where I discovered veganism. This was 14 years ago.

I do not remember why at the time I didn’t know the word for ‘vegan.’ Of course, no one around me was vegan, but if there could be a way to live without having to sacrifice animals, then I believed that it should be done. I started as a flexitarian, the closest to being a vegan, for a while before becoming vegan in 2009. I watched videos of animals being slaughtered a few years after I became vegan.

Nobody knew what ‘vegan’ was in Japan. Almost all Japanese people didn’t think of fish as an animal; fish broth is used in many recipes.

Both my parents love animals but think that food is separate. They do not usually eat a lot of meat, but are not planning on stopping. When I explained to my parents that chickens are shredded, they did not want to hear it, and even though I was vegan for a few years, my mother kept telling me: “You should eat eggs too.” When my daughter asks my mother: “Why do you eat these poor animals?”, my mother gets angry at her.

Therefore, I have given up on trying with my parents. My parents love the word ‘normal’. They probably think that they do not want to do anything out of the ordinary.

I’m not interested in famous vegan influencers. I am moved by the fact that my friends, who are not famous at all, continue to do small acts for animals.

Since my husband was raised in Germany, I like baking rye bread and German cakes.

I cook traditional Japanese or eastern Asian cuisine almost every day, including Teishoku set meals or Donburi (hot steamed rice with various savoury toppings). When I don’t have time I cook noodles. They are popular in Japan.

Check out our list of instant noodles that are surprisingly vegan.

Clothes, shoes, and cosmetics. There’s not much ethical choice.

Due to the importance of trends, vegan food is shelved next to the gluten-free aisle in supermarkets and the products are advertised as healthy. Vegan food can be organic, gluten-free and sometimes imported from other countries.

In Japan, gluten-free food is expensive compared to other countries, so vegan food is also generally quite expensive. However, tofu, ganmodoki (fried tofu fritters with vegetables) and natto are cheap and can be bought anywhere.

Oribio is liked by vegans and non-vegans alike. However, it’s quite expensive. Salunpowaku is simple, small cafe with very delicious food. Paprika Shokudo Vegan has a very nice atmosphere and it’s also a good restaurant for those with younger children. Another great place is 3R Kitchen Vegan.

Check out our Ultimate Guide to vegan food in Tokyo.

As a vegan, the city I want to visit is Tel Aviv. I have heard that there are many vegans in Israel. If I were to choose a city I have already visited, it would be Berlin or Vienna. I’d love to go to either city again and again. I can read a little German and am interested in veganism in Germany and Austria, and the Antifa movement there.

Read our story on the rise of vegan weddings in Israel.

In Japan, vegan diets are considered healthy. Yet, they still don’t recognise that speciesism is the same as racism and sexism. There are a few vegans who refer to speciesism. I believe that the younger generation of vegans is more liberal and flexible.

Japan’s gender pay-gap index ranks the lowest out of all developed countries, but people’s awareness of the environment is low, and the country is socially immature. Many people are uncomfortable with change.

Some vegans also strongly dislike medication, electromagnetic radiation and food additives. Recently, this has declined, but in Japan, vegans are known to be incendiary health advocates. If this sort of movement continues, then many will start thinking that veganism is like a cult and vegans will be disliked within society.

Anay Mridul
Anay is journalism graduate from City, University of London, he was a barista for three years, and never shuts up about coffee. He's passionate about coffee, plant-based milk, cooking, eating, veganism, writing about all that, profiling people, and the Oxford Comma. Originally from India, he went vegan in 2020, after attempting (and failing) Veganuary. He believes being environmentally conscious is a basic responsibility, and veganism is the best thing you can do to battle climate change. He gets lost at Whole Foods sometimes.
Previous articleIt’s not you, it’s me(at)
Next articleVegan catering: niche and expensive or easy to source?