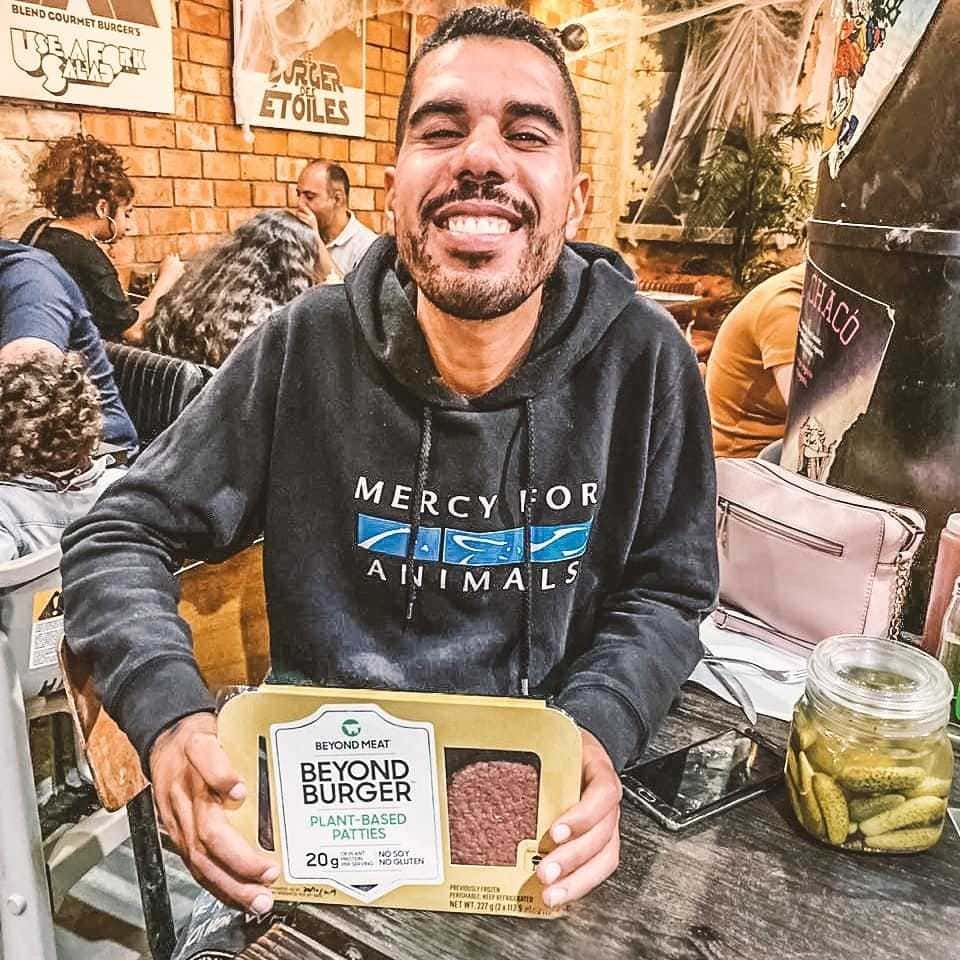 For World Vegan Month, The Vegan Review is sharing the stories of vegans from 30 countries around the world. Here’s one from Morocco.

Simohamed Bouhakkaoui, 29, is a psychotherapist for female victims of domestic violence from Morocco.

He went vegan over five years ago. “‘Nabati’ means vegetarian and vegan, but there are no terms that differentiate a vegetarian from a vegan,” he says. “This problem is presented in all other Arab countries.”

I went vegan for ethical, not dietary, reasons. I do not believe that humans have the right to oppress or abuse other species because they are intellectually weaker. For me, human rights and animal rights go hand-in-hand, in the sense that humans have a responsibility to care for animals and other humans because they both have feelings and thus the ability to suffer, and they are both capable of experiencing pleasure, fear and pain.

The biggest challenge I had to face was convincing my environment to accept this fact. But regardless of their mockery, it didn’t affect me that much. because it remains my personal choice, and I am convinced of my choices, ideas, and principles. Another challenge worth mentioning was that vegan restaurants are rare in Morocco. Yet, this doesn’t prevent me from moving forward, and subsequently, I opt for salads or homemade food.

It has been more than five years since I first adopted this diet, which I tried step-by-step until it became a full lifestyle. The modifications and changes were not that cruel, I got used to them very smoothly, which was not the case of my family and surroundings.

All popular Moroccan dishes are easy to veganise, like couscous, tagine, and pastilla. But if the countries of the Middle East are characterised by hummus, Morocco has a wonderful vegan dish called zaalouk, made out of eggplant. The zaalouk is the equivalent of the hummus of the Middle East, and it is a wonderful vegan dish made out mainly eggplants that everyone should try out.

Read our story on veganism in the Middle East.

Products from Beyond Meat target flexitarians and people who are looking to consume less meat. For the same reason, if you look for a Beyond Burger in the grocery stores, you’re more likely to find it in the meat case rather than next to other vegan or vegetarian options.

Vegan products in Morocco are still expensive, but at least they have become available in most major commercial stores in Morocco. However, fresh local vegetables and fruits are cheap and available everywhere. Moroccan companies have also started producing vegan products and one of them even added the term ‘vegan’ in the labelling.

Read our story on how the plant-based labelling war is heating up globally.

I recommend Veggie Pause, Le Tarbouche and Fondouk Bazaar in Fez, as well as Veggie Maroc and Organic Kitchen in Casablanca.

I want to visit London, because it was named the most vegan-friendly city in the world.

Now onto the hardest obstacle to fight: animal rights in North Africa and the Middle East. Arabs have grown up in a culture where every week, they watch the butcher slaughter a chicken in front of them after buying it. Similarly, they watch sheep being slaughtered in their houses every year. They witness all the stages of torture animals endure every day, all the time, to the point where it becomes normal for them to see these practices. They do not need the Cube of Truth to shock them with it.

Being merciful towards animals is very difficult to be assimilated by the Arab people because of the religious culture, which has another interpretation of the ‘mercy for animals’ concept. For this reason, I believe that the environment and health are the best arguments to convince Arab societies like Morocco’s to embrace veganism and subsequently adopt it as their mode of life.

Olivia Rafferty
Olivia is the Assistant Editor of The Vegan Review. An aspiring Middle Eastern correspondent currently studying journalism at City, University of London, she is passionate about the planet, she believes veganism is the first step to solving the complexities of climate change.
Previous articleUK government gives live events the green light
Next articleWorld Vegan Month: Being plant-based in Thailand