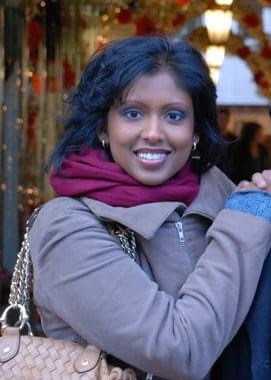 For World Vegan Month, The Vegan Review is sharing the stories of vegans from 30 countries around the world. Here’s one from Sri Lanka.

Ishara De Silva, 37, is the managing director of Srimal Group in Sri Lanka.

She had been vegetarian on and off for a while, and went fully vegan in 2016.

In 2012, I set up a company on holistic wellbeing. The doctors who work for me always recommended plant-based diet for our meal plans. We are also a social enterprise, so we help lots of animal charities, reforestation projects, etc., and during this work, I learned a lot about the suffering of animals. I also adopted a stray cat and learned how emotionally attuned animals are, and therefore I chose to go vegan. And same for my company — all meals at our centre are now vegan.

None. I strangely found it very easy.

My family also went vegan with me, and so did all our team.

My cat, which I adopted from the street and all the awareness programs I have watched and worked with.

Traditional Sri Lankan food is actually vegan. I did veganise some other more Westernised dishes I like (especially cakes, etc.).

I wish we had more plant-based milk options. We have a lot of coconut milk, but not much of the other nut milks that I love. But that’s okay.

Very. As I mentioned, a traditional Sri Lankan diet is vegan.

Unfortunately, even though our culture and tradition are based on Buddhism and therefore food is largely vegan, modern society is addicted to meat. So sometimes, it’s hard to find a vegan place to eat at. I guess my favourite place is my own centre.

London. It has some great vegan food places.

Anay Mridul
Anay is journalism graduate from City, University of London, he was a barista for three years, and never shuts up about coffee. He's passionate about coffee, plant-based milk, cooking, eating, veganism, writing about all that, profiling people, and the Oxford Comma. Originally from India, he went vegan in 2020, after attempting (and failing) Veganuary. He believes being environmentally conscious is a basic responsibility, and veganism is the best thing you can do to battle climate change. He gets lost at Whole Foods sometimes.
Previous articleIs it a good idea to adopt a pet during a pandemic?
Next articleThat Vegan Teacher: is Miss Kadie educating the masses or harming the cause?