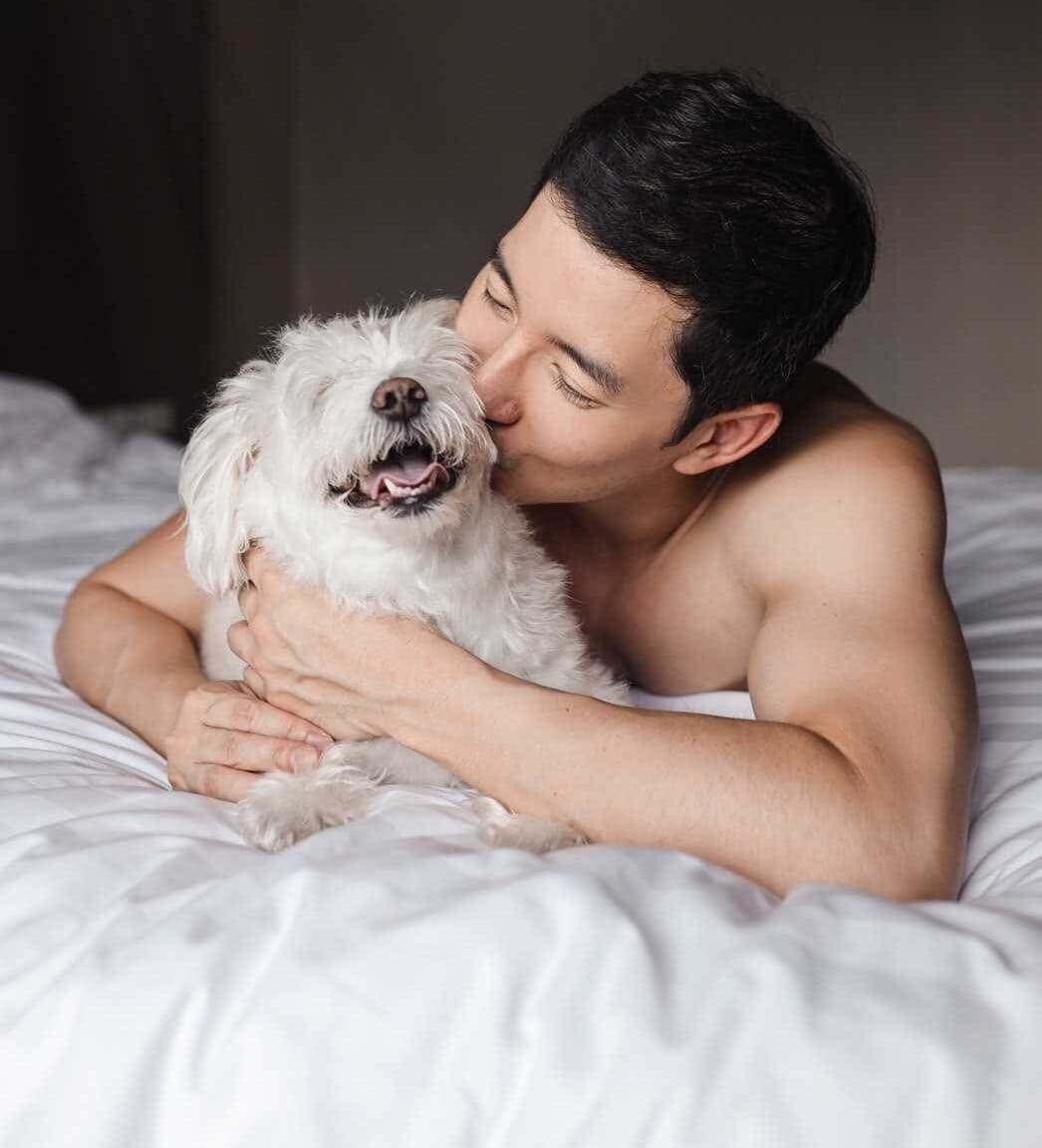 For World Vegan Month, The Vegan Review is sharing the stories of vegans from 30 countries around the world. Here’s one from Thailand.

Richie Kul, 40, is an actor, model and animal activist from Thailand.

He went vegan over six years ago. “People here in Thailand are becoming increasingly familiar with the term ‘vegan’ [written ‘วีแก้น’ in Thai].” he says. “But another term that is widely recognised here is ‘jay’ (เจ), which denotes the absence of any animal products as well as any pungent herbs like onion, garlic and chives.”

Like most people, I’ve always abhorred violence. From a very early age, I recognised the merits of living peacefully and compassionately, but when I sincerely reflected on my daily habits and choices, I began to notice a glaring disconnect between my words and actions.

As a 13-year old, I went vegetarian despite stiff resistance from my parents and relentless teasing from kids at school. But that was okay, because this budding rebel was accustomed to tuning out and digging in. For the longest time, I was convinced this youthful act of defiance was ‘enough’ — that I was no longer contributing to needless suffering. I realise in hindsight a lot of that was wishful thinking and perhaps I’d tuned out a little too much.

As the truth about violence and exploitation inherent in the dairy, egg, fashion and entertainment industries became more widely disseminated, I could no longer seek refuge in the illusion that there’s somehow a magically humane way to use and subsequently extinguish life. After 20 years as a vegetarian, I’ve been vegan now for six years and my only regret is not having made the transition sooner.

As I was already a longtime vegetarian beforehand, going vegan was relatively easy for me. I simply needed to ditch the excuses and make slight adjustments to my favourite dishes like fried rice, pasta and pizza, but that was made simpler with all the new cheese and egg substitutes that are now widely available in most major world cities.

I think after growing accustomed to two decades of me being vegetarian, most of the people close to me recognised that going vegan was the next logical progression.  Many were vegetarian themselves, and when presented with my rationales for making the switch, most have in fact followed suit.

My little girl, Lily, first and foremost, of course. She inspires me every day to be a better man, and having the privilege of caring for her each day and witnessing the depth of her vibrant personality and the fact that she experiences love, joy, fear and pain in much the same way I do reinforces my convictions and my resolve to speak out and defend the most innocent and defenceless among us.

Claudia Pievani is the founder of Miomojo, an innovative vegan Italian fashion brand based just outside of Milan. In an industry dominated by multi-billion dollar luxury brands that callously commoditise animals and traffic in the narrative that their flesh and fur are somehow covetable and aspirational, Claudia is bucking that trend and showing the world that beautiful and innovative products (made from apple and cactus leather, coffee grounds, ghost-fishing nets and even glass) can be made without harming innocent living beings. She also donates 10% of every purchase to impactful animal charities, and I truly admire her commitment to giving back.

To find out more, read our interview with Miomojo founder Claudia Pievani.

One of those supported charities is run by my friend Jill Robinson, who founded Animals Asia in 1998 and has committed her life to saving moon bears exploited in the bear bile trade. Thus far, she and her incredible team of animal heroes have saved over 600 bears and operate two incredible sanctuaries in Vietnam and China. She is a true animal lover in every sense of the word, so much so that her staff canteens at the sanctuaries are fully vegan, as are the menus at all Animals Asia fundraisers.

As a committed vegan, she doesn’t confine her attention and concern to companion animals and wildlife, instead extending it generously to all living beings. It is so reassuring and heartening to see that an organisation called Animals Asia is truly committed to the protection of all animals in Asia.

A proud Thai vegan through and through, my favourite dish to make at home is larb tofu. Here’s my quick and easy recipe (takes 30 minutes from start to finish):

Toast grains of rice over low heat with a small amount of vegetable oil until brown, grind with a mortar and pestle, and set aside. Fry cubed firm tofu in vegetable oil over high heat until brown for eight minutes. Add the sliced mushrooms and thinly sliced onions (if using), and cook for an additional five minutes. Mix in the rice powder, lemon juice, some fresh mint, mushroom soy sauce and a teaspoon of chilli powder. Serve over quinoa or rice and enjoy.

Check out more recipes from The Vegan Review.

Since moving to Thailand, I’ve found that sourcing good quality vegan protein powder has been more difficult than I’d expected. iHerb takes several weeks to ship here and has strict weight limits in place, but thankfully, there’s a bright light at the end of the tunnel in the form of Viramino, a new plant-based protein made from pea protein isolate that will be launching in early 2021. I sampled its chocolate coconut flavour, and it’s incredible.

Last month, I had the pleasure of attending the Root the Future festival (the largest plant-based and sustainable festival in Asia) here in Bangkok, and was blown away by the sheer number of new vegan brands sprouting up and how easy it was to order their products. From brownies and cheeses to plant milks and kombucha, there are so many great cruelty-free options to choose from now.

I love the balance of innovation and tasty comfort food at Bangkok City Diner, run by husband-wife duo Mika Apichatsakol and Gareth Sheehan and offering a satisfying menu of favourites from grilled cheese and tom yum mac and cheese to laksa and its award-winning ramen, which features a one-of-a-kind vegan egg made in-house.

Both are pet-friendly too. Talk about inclusive.

Thailand is home and there’s no place I’d rather be.

Breaking free from the deeply entrenched habits, the many myths, and the excuses we’ve erected to legitimise them can be a significant challenge in every part of the world, especially when people are instinctively defensive and understandably loathe to recognising their complicity in animal use and abuse. Yes, it’s jarring, and yes, it’s uncomfortable, but that uneasiness doesn’t change the horrific reality for over 50 billion animals every year, who are systematically bred and slaughtered because we directly fuel a demand for their flesh.

I think people naturally baulk at the idea of seeing themselves as anything other than good and kind. In doing so, they overlook the simple truth that one ought to regularly do good and kind things in order to deserve that designation. Some might say that life is about picking your areas of personal concern, and I understand that for some, education, poverty alleviation, women’s rights or wildlife conservation are what drive and motivate them. And that’s very noble and admirable.

But I also believe that it’s hard to speak credibly of peace, love and empathy if, several times a day, we engage in a practice that is inherently non-peaceful, non-loving and most profoundly lacking in empathy. When we know better, we ought to do better, and when we do better, we have the opportunity to change the world.

Olivia Rafferty
Olivia is the Assistant Editor of The Vegan Review. An aspiring Middle Eastern correspondent currently studying journalism at City, University of London, she is passionate about the planet, she believes veganism is the first step to solving the complexities of climate change.
Previous articleWorld Vegan Month: Being plant-based in Morocco
Next articleAre there vegan E numbers or do they all have to be avoided?