Teen vegan activist Zak Mullen: ‘It was like I’d been hit by a bullet of truth’ 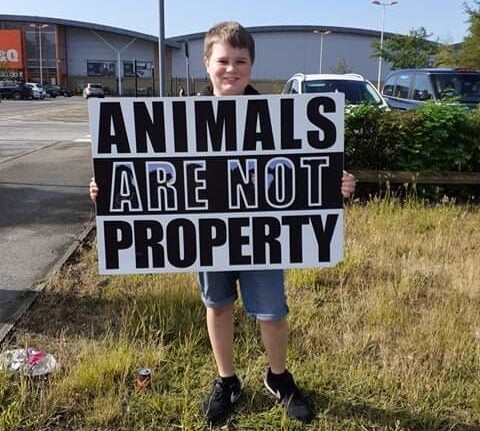 13-year-old Zak Mullen, known as Zaktivist, is the latest of a wave of young activists standing up for animal rights, veganism, and the need for education reform.

“I thought he was just talking nonsense,” says Zak Mullen, on the man who influenced him to stop eating animal-based products. The 13-year-old was watching vegan activist Joey Carbstrong’s How To Be Vegan At Tesco video when he first learned of the way calves and their mothers are treated for the production of milk. The more the teenager dug, the more he realised the gravity of the issue.

“It’s like I’d just been hit by a bullet of truth,” Mullen says. He went vegan the next day.

But Mullen doesn’t believe veganism is big enough yet, which is why simply transitioning was not enough for him. He had to get active. “When you become active, you are helping, encouraging, and making others not be a part of the suffering,” he explains.

Eight-year-old Mullen was walking through Norwich city centre when he first came across The Cube of Truth, his gateway into vegan activism. Five years later, when he turned vegan, requesting to be a part of the Anonymous for the Voiceless protest was his top request. In mid-December last year, the teenager left the protest high on energy, having met hundreds like him and learning just how wide the animal activist community is.

Zaktivist, as he’s commonly called, says it’s important to keep active because human beings are conditioned from the day they are born to believe animals aren’t living beings. “As soon as you come out of the womb that wall gets built up every single day, until you get to the age of nine, where they think animals are simply things: shoes and sandwiches,” he adds.

While the 13-year-old stands by his beliefs and doesn’t plan on ever going back, his activism and lifestyle choices have not made life easy.

For a while, Mullen was picked on for his body image. But when he turned vegan, he says he “gave them a second gun, 10 times more ammunition and a whole other weapon”. Students at his school often said: “Oh, you can’t possibly be vegan, because of your body size.” Zaktivist explains that while it remained verbal, this type of abuse didn’t really affect him.

Soon, the words became actions, and the teenager found himself the victim of a series of attacks. “They would squirt milk all over me, throw pizzas at me, sausage rolls, bacon sandwiches, and even whole chicken wings,” he recounts. The teenager reported these incidents repeatedly. When someone spat in his face, his parents were disgusted and decided to speak up too.

But no action was taken. “They would say: ‘Oh, it’s just food, grow up and calm down,’” he recalls. Careful not to place religion on the same level as veganism, the young activist still thinks discriminating against someone for their lifestyle or beliefs is still a hate crime.

Mullen thinks change should come from the top first. Teachers should learn about issues like this in their training, just like they learn how to deal with religious issues. Because after being bullied so many times, Mullen retaliated with violence. He found himself being punished for standing up for himself, like many victims of bullying often do.

Mullen won’t be returning to school when term starts in September, he will be home-schooled instead. He explains that this is not only a consequence of the toxic environment his classmates had created, but because of the material he was being taught.

Recounting the time he was made to complete a ‘healthy plate’ diagram in class, the vegan activist says he filled it in with spinach, chickpeas and a quinoa salad. He remembers labelling the nutritional elements, including protein levels, and being told off by his teacher: “That’s incorrect, you have to have fish or meat,” he told Mullen.

“He also said humans are natural omnivores,” he says. When he tried to contest this by explaining: “If you look at our body functions, and the way it works, you can clearly see we’re not designed to be omnivores,” he says his teacher asked him if he wanted to be removed from the class.

“I was shut down in lessons for expressing my beliefs,” the teenager says. Looking at the situation in a positive light, Mullen believes this is just an opportunity for education to reform. Veganism is beginning to be protected more and more in the workplace, so protection at school will hopefully follow suit.

“I don’t think it’s anyone’s fault,” Zaktivist says. He thinks the only solution is education. “People are so easy to dismiss veganism because they are taught things like ‘Plant feels pain’, but this can’t be true because they don’t have a brain or a nervous system, so they can’t feel pain,” he elucidates.

Referring to the tobacco and alcohol industries, the teenager says the animal agriculture industry plays a similar role in society. Millions of pounds worth of the EU’s budget is put into livestock farming every year, and the UK’s economy is largely dependent on the output of this industry. “So if they taught veganism at school, more people would transition and I don’t think the government would like that at all,” Mullen explains.

But he is hopeful that like tobacco and alcohol, science will soon prove otherwise. “But instead of smoking and lung cancer, it’ll be meat and heart disease.”

‘The larger our presence, the more powerful’

Although Mullen is an activist himself, he doesn’t think all forms of vegan activism are necessarily correct. For him, there are two types: “An educator, who wants to make change, and another who sabotages because they want to hit the industry hard.”

He supports both, but doesn’t agree with the methods of some of the latter: “It gets dangerous when we start being called terrorists, because many non-vegans and vegans alike turn away, saying they don’t want to be associated with a particular reputation.”

But this shouldn’t stop vegans from getting active. Zaktivist stands by this motto: “The larger our presence, the more powerful.” Australian activist Joey Carbstrong played a massive part in the teenager turning vegan but he knows that there is a need for more young activists. The more young people speak up, the more likely a “non-stop generational process where we can fight for animals over and over”, will happen.

Only 10 months after becoming a vegan activist, people are already telling him: “One day, you’ll be the leader of the organisation of something massive.”

“It really gives you so much passion when people say that,” he says, smiling.

The 13-year-old doesn’t know what adult life will bring yet, but he knows that settling for something like police work will not suit him. He wants to join something that achieves change, and doesn’t mean getting shut down for his beliefs.

Mullen says veganism is not just a trend; it’s here to stay for good: “One day everyone’s going to have to be vegan with the way the world’s going, it’ll be a law.” He hopes that not too long from now, the people who discriminated against him for his beliefs will regret their actions. “One day they’ll all turn vegan and I’ll say: ‘I told you so.’”

Olivia Rafferty
Olivia is the Assistant Editor of The Vegan Review. An aspiring Middle Eastern correspondent currently studying journalism at City, University of London, she is passionate about the planet, she believes veganism is the first step to solving the complexities of climate change.
Previous articleThe PETA-Approved Vegan label: Making cruelty-free clothing easy
Next articleThe rise of veganism in the ice hockey community