Made with Vegan mayonnaise, smokey chipotle with a hint of lime, the new sauce is now available at 60+ participating restaurants nationwide.

On the new launch, Tortilla’s Head of Food Martyn Clover said: “we pride ourselves on having an option for everyone and sour cream and a sour cream and cheese alternative is one thing our vegan customers ask for the most. We’re excited to be giving it to them this Veganuary and beyond!” 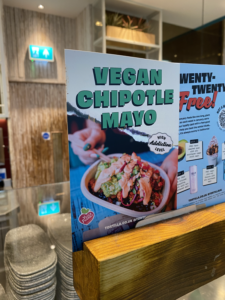 As one of those vegan customers I was pleasantly surprised to see the new chipotle mayo sign at the checkout of my local Tortilla which I coincidentally had for lunch yesterday hours before receiving the press release. The restaurant has been one of my go-to spots for a while now, and although not lacking in anything, the only downside is the lack of vegan condiments. Luckily I opted for a bowl as the display was only at the checkout point, if I had gotten a burrito it would have been too late to add the sauce.

Accredited by both the Vegan and Vegetarian Society, Tortilla’s menu is over 70% plant-based and offers a healthy, affordable option for vegan, flexitarian and vegan-curious consumers taking up the Veganuary challenge this month.

Toni Vernelli, Veganuary International Head of Communications says: “We’re thrilled that Tortilla is  launching a vegan chipotle mayo this January. While most past Veganuary participants tell us that  eating vegan was actually much easier than they expected, 20% of participants still find eating out a  challenge. So this news will make it even easier for people who want to help the planet to try vegan  this January.”

Damoy Robertson
Damoy Robertson is an entrepreneur and founder of The Vegan Review. Damoy is dedicated to spreading veganism to the masses which he believes will enable people to make better, more informed decisions concerning the way we all interact with animals and our planet.
Previous articleWards Hotel, The First ‘Vegan-Friendly’ Certified Hotel in The UK
Next articleVeganism Around The Net: Impossible Responds to Bloomberg+ Veganuary Turns 10!