The importance of community as a vegan

Veganism can be a lonely place sometimes. Aaron Frid, founder of The Vegan Switch, is developing a space for people to transition safely and knowledgeably.

“It can be a lonely place sometimes,” says Aaron Frid, on transitioning to veganism. “It genuinely helps when you’re in a community and can help each other.” After founding The Vegan Switch, Frid is on a mission to help those looking to turn vegan have an easier journey, and to stay for the long run.

His personal journey started almost two years ago, after watching Dominion. Immediately drawn to the animal ethics, he and his whole family went vegan overnight. While he understands that most people need outside help, they were okay doing it alone. “You can find everything you need online, and the help we had was that we did it together,” he says. But not everyone has a supporting family, or partner, and some are the first in their entire community to come across veganism.

Currently based near Glasgow, the Frid family are also lucky enough to be down the road from a vegan-friendly Morrisons and an array of vegan restaurants.

For a while, Frid was mentoring for Challenge 22, a free online framework guiding people in veganism for 22 days. Over 400,000 people have tried Challenge 22 since its launch in March 2014, but The Vegan Switch’s founder says this is mainly just diet-based, and the statistic doesn’t include the majority that don’t continue the lifestyle afterwards. 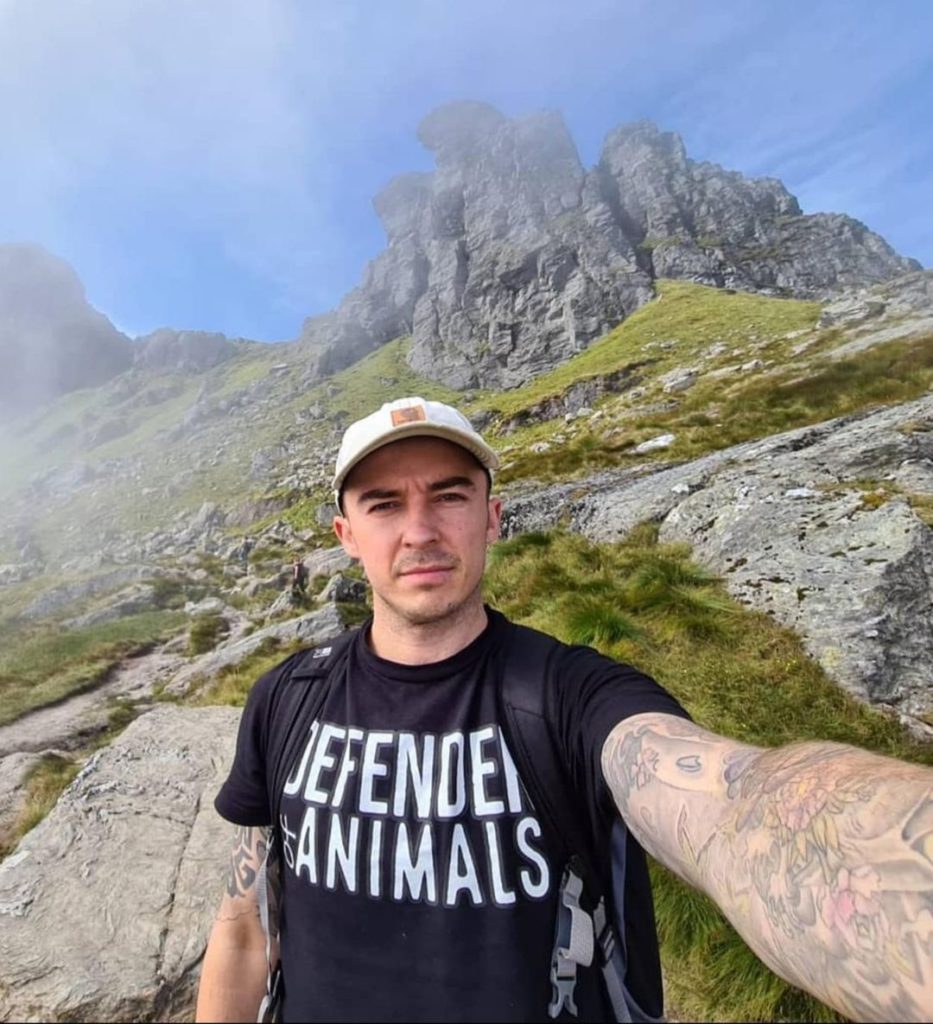 A few months down the line, Frid was kicked out of the community. He says a lot of non-vegan content was beginning to appear on its Facebook, seemingly supporting an anti-vegan attitude. He called them out. So they blocked him.

Frid isn’t angry about this. He smiles at me and says: “I got in touch with my friends, Dan, Grumpy Vegan Grandad, and Dani from UK Vegan Family, and told them my plan.” Due to lockdown, he had a lot of free time, so he launched his own platform for non-vegans — a space championing ethics and animal rights first and foremost.

Frid makes it evident that The Vegan Switch is more than just a meal plan service. While some have vast experience in nutrition and can recommend the best plant-based recipes, he tries to get his mentees to understand veganism is more than the food. “If you help people to go on a plant-based diet, it’ll just be a diet. There’s no guarantee they will stick to it.”

Having launched in June 2020, the free mentorship programme is still in its early days, but its website is beginning to boast an impressive range of testimonials, from people from all backgrounds.

Kaleb always considered himself an “animal lover”, but never understood the appeal of veganism until after working in a slaughterhouse. He quit his job and joined Facebook groups, but felt lost. Then he joined The Vegan Switch. “Without the support from Aaron, I’d have struggled,” he recounts.

Tracy had been eating meat for over 50 years, and after trying every other method out there to solve her health issues, she gave The Vegan Switch a go. She says her mentor was “like having a buddy on speed dial”. Now six weeks in, she and her whole family are vegan, and she says her health has never been better.

The Vegan Switch doesn’t go out looking for non-vegans. Frid believes you can’t push anti-vegans into veganism. They usually find it through the website, or social media, and will send in a message asking for help. After answering why they want to go vegan, and what they know about the lifestyle already, Frid identifies which mentor will suit them and lets them take charge.

“There’s no rulebook or script, as long as they show reasonable guidelines,” he says on mentoring. “I would never turn a mentor down, but I’d make sure they know our goal.”

The mentors are not strict, but Frid admits that he doesn’t encourage reduction. If a mentee tells him they’re still going to eat cheese, he will tell them it’s not good enough. Most of the time though, this won’t be an issue, as mentees are on the verge of transitioning and just need the final push. And different people need different approaches. “Some are good with the nice approach, whereas some might need Dominion shoved in their faces,” he says laughing.

The Vegan Switch is still small, but it’s already global. Mentees are currently based in the UK, US and various parts of Europe. Frid is a humble mentor, with no interest in making money or putting his name on the programme. He just wants the vegan lifestyle to go global, and for as many people as possible to join the community. So no one ever feels lonely again.

Olivia Rafferty
Olivia is the Assistant Editor of The Vegan Review. An aspiring Middle Eastern correspondent currently studying journalism at City, University of London, she is passionate about the planet, she believes veganism is the first step to solving the complexities of climate change.
Previous articleExclusive: Free4DairyFree is rallying to end the non-dairy surcharge in coffee shops
Next articleOatly confidentially files for IPO in the US