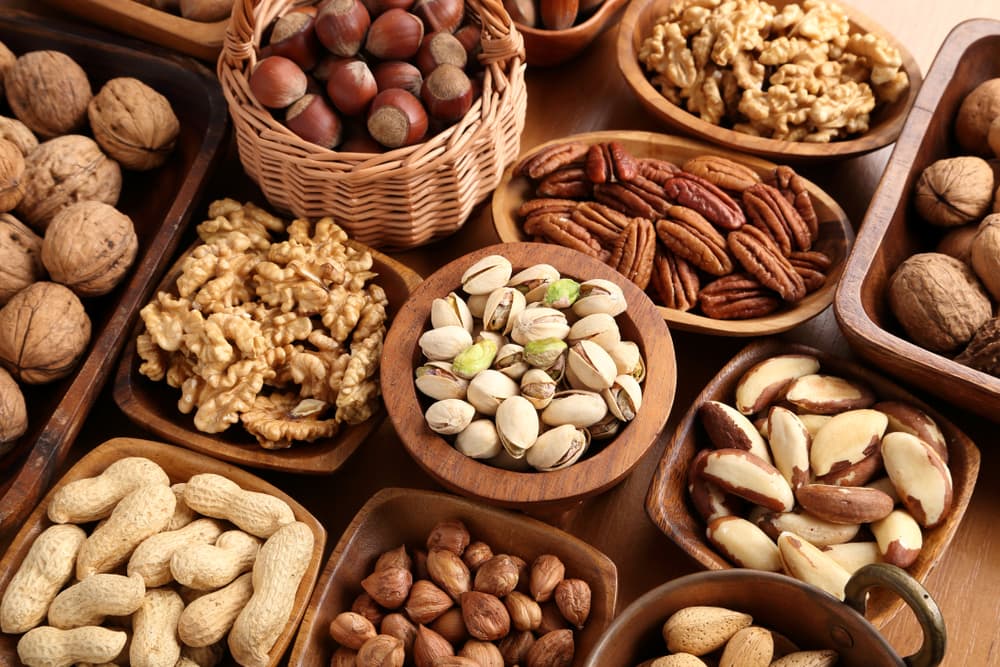 Within veganism, nuts are used as a protein source or alternative ingredient, but what does that mean for those with serious allergies to nuts?

Although plant-based diets are praised for their health benefits such as lower blood sugar levels, improved kidney function and lower risk of heart disease, an imbalanced 100% plant-based diet can increase the risk of nutritional deficiencies, including protein, iron and zinc. Nuts are therefore perceived as key to a vegan diet, as they provide the essential nutrients vegans may be lacking or deficient from. They provide energy, complex carbohydrates, fibre, essential fatty acids and high amounts of protein.

However, if you’re allergic to nuts in any way, this creates a clear issue: you not only need to find another source of protein, but also have to be very careful when looking at vegan foods and products in case they contain (or have had cross-contamination with) nuts, further limiting your diet.

Nut allergies occur when your immune system mistakenly identifies nut proteins as something harmful, leading to the release of symptom-causing chemicals into your bloodstream. These can range from a rash (hives), nausea and cramps to your throat closing up (anaphylaxis).

Peanuts and tree nuts are among the most common, with peanut allergies reported to be the second most common food allergy in children. A study looking at data from almost 3 million people collected from 2001 to 2005 showed that in 2005, about 5 in 10,000 people had a recorded peanut allergy.

So how do you balance the two? Rachael Dunseath, who’s been allergic to tree nuts and groundnuts for six years, explains that her allergy “came on overnight as an overspill from oral pollen allergy syndrome”, and it is quite severe.

Dunseath has now been vegan for 3 years: “The full vegan transition took a while, as I’m also gluten-intolerant and I really wasn’t sure it was doable. My husband and I are now vegan, and my two daughters are vegetarian for now — we’ve not looked back.” She explains that when she’s at home, she doesn’t think about it much as she loves cooking and cooks most things from scratch. But she finds eating out difficult: “So many vegan restaurant dishes contain nuts. Throw in the gluten-free issue too and it becomes impossible in some places.”

Dunseath says the hardest vegan product to find that’s also allergen-friendly is cheese: “I would love to try all the amazing looking aged cashew cheeses. I miss cheese and I’m not really a fan of the coconut-based products.” She has since launched Myroo Skincare, a vegan, sustainable and nut-free skincare brand to help those who have allergens find appropriate and sustainable skincare.

Check out our Ultimate Guide to vegan cheese in the UK.

Allergy Box is an online company launched this year that specialises in providing food and snacks for those with different allergies or dietary needs. It was established by two parents, Alice and Andrew Hall.

Annabel Gill, the brand’s marketing executive, explains the inspiration behind the company: “Alice and Andrew’s daughter has four food allergies. They’ve found it really difficult in normal supermarkets to find fun and exciting foods that are completely safe for her to eat, especially during the pandemic — you can’t really be picking up all the food in the free-from aisle and putting it back when you read the back of the packet and it’s got an allergen in there.”

Gill explains having Allergy Box and allergen-free foods easily available for Alice and Andrew’s daughter is “essential to stop her from missing out”, as there’s typically a lack of options for those with allergies. “Free-from aisles aren’t segmented, so it’s kind of a free-for-all. Especially if you’re looking for multiple allergens; that is a real time-heavy activity. What [Allergy Box] stocks is a wider mix of products. We’re making these foods and their discovery a bit more accessible,” she explains.

Within veganism, many vegan recipes do include nuts, but Gill says it’s less challenging now for those with allergies than it was before: “There are now lots of vegan options that aren’t nut-based, and lots of vegan food manufacturers are developing new recipes with soya and wheat proteins as a primary ingredient — it’s just knowing where to look.”

Niamh Maria (also known as thenutfreevegan on Instagram) has a severe allergy to all nuts and seeds. “My allergy is very severe, and I carry two EpiPens with me at all times.” The 22-year-old explains she never considered veganism until she met her boyfriend, who’d been vegan for seven years. She then became vegetarian for a year-and-a-half, before going vegan in 2019.

“I’ve not looked back. The more I learnt about veganism, the more I wanted to change my lifestyle. Not just through my diet, but clothing, cosmetics, and so on for ethical and environmental reasons as well.”

Although she did experiment with food at the start, Maria explains the reason why she delayed going fully vegan was due to her allergies, but adds that research is what helped. “Knowing exactly what’s in all the fruits, vegetables, legumes, etc. helps me work out how much of each food I need in order to stay healthy. I would honestly say since going vegan I’ve been the healthiest I’ve ever been in my life.”

Similar to Dunseath, Maria says that although finding products that are both vegan and allergen-friendly isn’t hard, dining out is often difficult and she needs to do research and ring restaurants prior.

For those with lifelong nut allergies, adjusting your diet is a normal thing. To adjust it for a preference or healthier lifestyle requires research and patience, but it’s far from impossible. Although many vegan options do include nuts, particularly for home cooking, balancing veganism and nut allergies is a possible lifestyle that many like Dunseath and Maria have achieved.

Yasmin Jafar
Yasmin is a journalism undergraduate at City, University of London who is a massive foodie — especially for anything dessert- or coffee-based! She’s passionate about food, its history, and researching and reviewing different diets around the world.
Previous articleWhat does cruelty-free mean? Is it vegan?
Next articleMy experiences facing the extremes of vegan activism