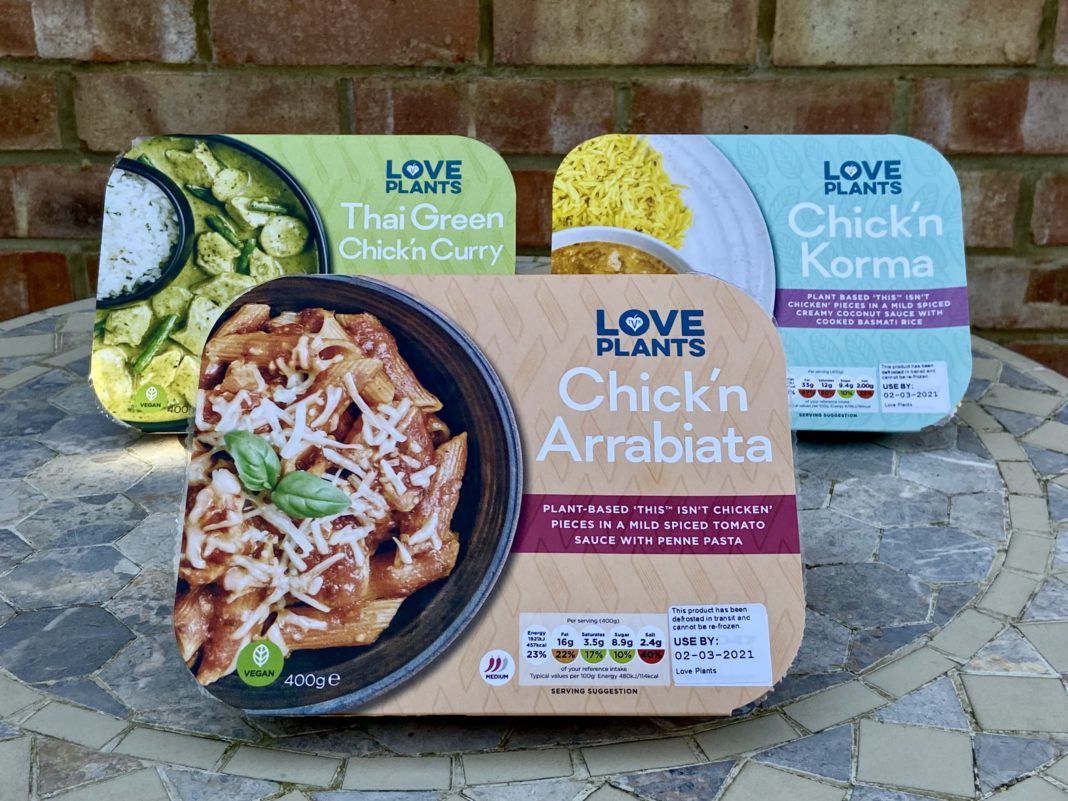 We tried the three new ready meals by Love Plants, a sub-brand of TheVeganKind, to review them for flavour and texture.

These meals are inspired by cuisines the world over, with a Thai Green Chick’n Curry, a Chick’n Arrabbiatta and a Chick’n Korma. I reviewed all the new ready meals by Love Plants. Here’s what I thought.

Hailing from India, this was the meal I was looking forward to trying the most. Removing the label, the colour really matches the image — a promising sign. After heating it as directed, the korma emits quite sweet aromas first off.

The dish looks visually appealing with vibrant colours. The rice is cooked perfectly for a korma — it’s fluffy and the grains are well-separated. But the spices and seasoning in the rice aren’t too forward. You can’t taste the turmeric or salt, just the cumin, owing to the presence of the seeds.

The chicken is juicy and tender. It absorbs the coconut milk and the spices fabulously and works really well with the other components of the dish. However, it is a tad grainy in the aftertaste.

The korma itself is incredibly flavourful. The balance of the different spices is on point, and it really tastes like the real deal. But that sweet aroma is telling in the overall tasting — this is a touch too sweet. The sugar lets it down and distracts from the otherwise brilliant flavour. Although, the texture of the rice and the chicken paired with the delicious sauce is enough to compensate for it.

This one was the most disappointing of the lot. An arrabbiata typically doesn’t have any chicken in it — the greatness is in its simplicity — but vegan chicken is a good source of protein to add to it. When mixing the components after heating, it doesn’t look like there’s enough sauce to cover the penne and chicken. It smells pleasant though, with a whiff of tomato and cheese.

The chicken pieces are slightly too big — they would have better served the dish if they were shredded. The texture, unlike in the korma, is a little rubbery and chewy. It tastes quite nutty but doesn’t take on any of the flavours from the tomato sauce.

Given that this is an arrabbiata, it isn’t too spicy. While there is a balance of flavour notes — there’s a little tang, some heat, and a bit of sweetness (the latter slightly heavier than the rest) — there’s too much going on. The sauce is somewhat complicated for a dish renowned for its lucidity. And the more you taste it, the more you’re reminded of pea protein.

The penne is cooked inconsistently and is starchy in texture. The vegan cheese is fortified with B12, which is a nice touch, but it doesn’t melt well. The vegan chicken is the best thing in this ready meal by Love Plants, but this is quite average.

Now then. Here’s the absolute winner. This green curry is absolutely incredible. It’s hard to find good vegan Thai food as part of ready meals, but this breaks that trend.

The choice of vegetables is clever. The green beans are tender and cooked to perfection, and the water chestnuts bring a wonderful textural complexity to counterbalance the former. Different dishes call for different types of rice and its consistency. The jasmine rice in this green curry is aromatic and just the right amount of sticky.

The THIS Isn’t Chicken isn’t chewy at all — it’s tender and delicious. It acts as a beautiful sponge for all the mingling flavour notes. And what notes! The curry is the star of the dish — as it should be. Thai green curry is hard to get right, with a multitude of ingredients that need to be carefully balanced. TheVeganKind’s Love Plants nails that in this ready meal. You get a spicy kick from the jalapeños (a surprise addition as you’d traditionally use bird’s eye chillies), which is complemented with the galangal, and all of it is well-rounded-out by the lemongrass, which shines through the dish with its aroma and flavour.

Yes, it’s a touch saltier and I’d have loved for this meal to have a sprinkling of fresh lime. But I still can’t stop eating it. Thai cuisine is amongst my favourites, and if you told me this came from a local Thai restaurant, I’d happily believe you.

For the most part, tasting these meals was a highly pleasant experience. The problem with most ready meals is that they’re rarely substantial. You don’t need to cook but you don’t always get enough in a ready-to-eat box. Not with these. Love Plants’s meals fill you up, owing to the vegan chicken from THIS.

They’re not frozen meals, so there is a use-by date for them, and each dish takes about four minutes in the microwave. £3.79 can be steep for a ready meal, but it’s worth it for these ones (at least the korma and green curry). If you’re looking for a new vegan product to try, I couldn’t recommend these meals more. Roping in THIS is a masterstroke — it’s plant-based meat at its best.

Love Plants is available exclusively on TheVeganKind supermarket for RRP £3.79 per meal, or £10 for three.

Anay Mridul
Anay is journalism graduate from City, University of London, he was a barista for three years, and never shuts up about coffee. He's passionate about coffee, plant-based milk, cooking, eating, veganism, writing about all that, profiling people, and the Oxford Comma. Originally from India, he went vegan in 2020, after attempting (and failing) Veganuary. He believes being environmentally conscious is a basic responsibility, and veganism is the best thing you can do to battle climate change. He gets lost at Whole Foods sometimes.
Previous articleWhat is seitan, is it healthy and how do you make it?
Next articleJordi Casamitjana: ‘Confronting my own inconsistencies showed me the path to ethical veganism’