Have a break: is Nestlé’s new product launch a timely development with a dark agenda? 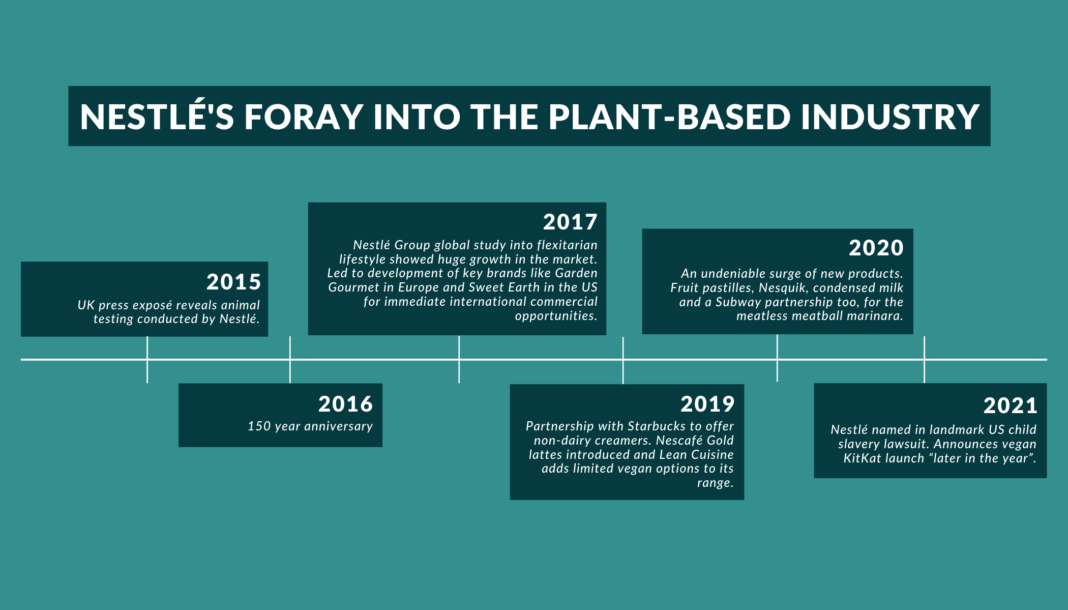 Nestlé’s new chocolate launch leaves a bitter taste in the mouth due to concerns about negative headline suppression and greenwashing.

Tactical product launches are nothing new, especially now that the plant-based market is demonstrably the sector to tap into for a fast surge in profits. Just look at the dazzling array of exciting new releases, specifically held back until the end of the year so as to align with the ‘new year, new vegan’ trend.

And while seeking to top up the coffers by embracing an alternate demographic is hardly a crime, it appears that certain household brands are hiding unethical production methods behind devious marketing ploys, designed specifically to ‘squash’ negative press coverage. The problem is, the jig seems to be up. At least for Nestlé, Mars and Hershey, all of which have been explicitly named in a US child slavery lawsuit filed by International Rights Advocates.

I wish this was getting national attention. You have eight former child slaves of the Ivory Coast taking on western capitalists. https://t.co/DsPUZokTzn

Terence Collingsworth, spokesperson for International Rights Advocates, exclusively told The Vegan Review: “Nestlé and the other big cocoa companies have been misleading consumers for decades about their reliance on child slaves to harvest cocoa in Cote D’Ivoire.”

He added: “Our lawsuit will eventually put a stop to this, but in the meantime, we need all consumers to do their part. Contact Nestlé and the other companies and tell them you will not purchase their products until they stop using child slaves, allow independent monitoring, and support remedial programs for former child slaves. Be an active consumer and help stop a horrible company from profiting from child slavery in 2021.”

Nestlé is no stranger to unflattering press coverage, and, having defended its continued prolific use of animal testing as recently as 2015, it has rarely been considered a brand for vegans. But, as the popularity of plant-based living skyrocketed, a tactical about-turn was initiated, to rebrand Nestlé as a company for everyone.

Cue longstanding favourite products being veganised or adapted to be suitable for those eating consciously. And though not everybody has been a fan of the image overhaul, with former professional footballer Alan Brazil famously denouncing the new vegan-friendly Fruit Pastilles, it appears as though Nestlé has welcomed a legion of new vegan fans. So much so that the vague floating of an unspecified release date for a vegan KitKat that is “coming soon” has been enough to push reportage of the US lawsuit off Google’s coveted first page of search results.

KitKat-V. Certainly a hashtaggable moniker, but a long-awaited addition to the veganverse? That’s unquantified, though its surprise announcement has sent the social media world into freefall with exclamations of joyous delight that the four-finger wafer will be suitable for plant-based eaters. But let’s take a moment to assess the cost of this development. And no, we don’t mean the assumed upcharge from the standard 60p for a dairy-based version.

Read our look at whether Nestlé deserves its place in the plant-based industry.

A first of its kind, the US class-action lawsuit claims that Nestlé, along with its fellow defendants, “knowingly profited” from forced child labour and the cost-savings of using an illegally young workforce, as opposed to seeking adult workers. One plaintiff is cited as having been just 11 years old when coerced into long working hours without being supplied with any appropriate clothing and, ultimately, without ever being remunerated. The dangerous working conditions are a central concern in the case, which continues.

When asked for comment, Nestlé purported that the lawsuit “does not advance the shared goal of ending child labor in the cocoa industry” before continuing “child labor is unacceptable and goes against everything we stand for. Nestlé has explicit policies against it and is unwavering in our dedication to ending it. We remain committed to combatting child labor within the cocoa supply chain and addressing its root causes as part of the Nestlé Cocoa Plan and through collaborative efforts.”

The question is, how should vegans be responding, both to news of the lawsuit itself and the curiously-timed KitKat-V teaser? The Vegan Society has granted use of the Vegan Trademark licence. But given Nestlè’s wider ethics, are we being given the green light to overlook perceived greenwashing to try a new novelty release? Not according to the plethora of disappointed vegan advocates who have taken to their social platforms to decry the move.

In a statement to The Vegan Review, The Vegan Society’s business development marketing manager Ericka Durgahee said: “Our website and communications never encourage anyone to buy just because of the Trademark registration, nor do we endorse products. We register each product to our vegan standards, and we have a blog explaining why we work with brands with vegan ranges who aren’t vegan.”

She added: “We regularly ask that people make their own purchasing decisions. The Trademark is a certification of a product meeting our standards, not an endorsement of a brands’ ethics, ethos, nor sustainability or accountability.”

The decision of whether or not to buy into marketing tactics and media manipulation is one that comes down to individual choice, but one thing is undeniable: as a species, we have a duty to protect and defend those who are smaller, weaker and more vulnerable.

Regardless of society, eating preferences and lifestyle choices, we must bear the responsibility of stewardship and we have to translate this to large corporations in the only way they understand: through their growing or shrinking profits. With that in mind, maybe it’s time to ‘have a break’ from the hype of a new chocolate bar and rediscover the meaning of human value. We could even take this one step further and ask: is this the catalyst to reconnect with the roots of veganism itself?

This story was amended on February 17 to add The Vegan Society’s response.

Amy Buxton
Amy is a committed ethical vegan, raising a next generation compassionate human with her husband and their beloved dog, Boo. A freelance writer with a background in PR, she decided to use the COVID lockdown period to refocus her client base and has come to The Vegan Review as a senior writer and editor, before moving into her external content director role. "What we should be doing is working at the job of life itself" is Amy's mantra, courtesy of Tom from The Good Life.
Previous articleShrove Tuesday 2021: Our favourite vegan pancake recipes
Next articleInvestigation shows Scottish salmon slaughterhouse killing fully conscious fish